Where do I begin on this one? Just say I have torn feelings about virtually every angle I want to discuss, shut the computer after one sentence, and quit while I’m ahead?

I guess let’s get some obvious facts on the table.

Bell Mountain is covered in spray paint – from the simple names and dates of people who were there to complex graffiti to racial epithets.

Bell Mountain was pillaged for profit by outsiders 50+ years ago leaving it one of the most badly scarred places in all of North Georgia.

Bell Mountain was a popular place for locals who used to earn the reward of stunning views by making a hard earned hike to the top.

Bell Mountain became popular with the off-road community because of it’s steep incline and rutted out road with deep holes.

Bell Mountain now has a brand new graded out road with a brand new viewing deck (already being painted on by the way).

Some locals and visitors hate the new road and the new deck.

Those are the facts. 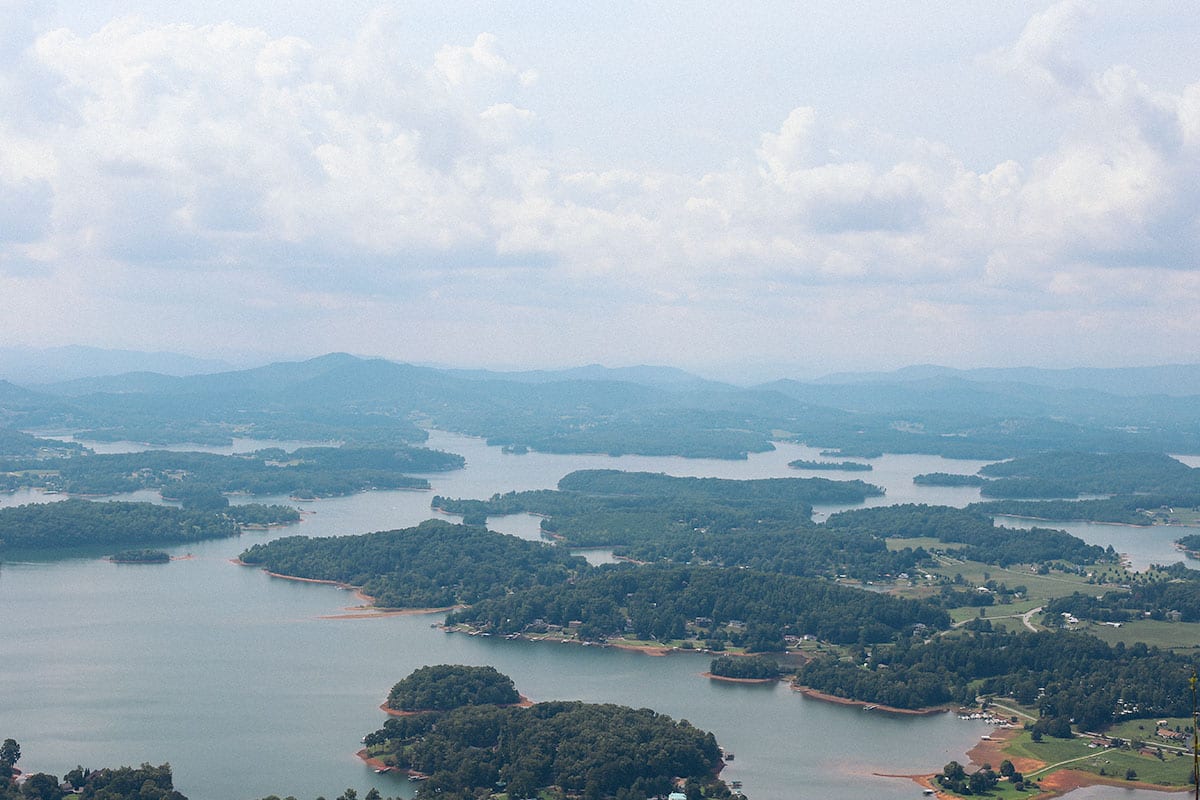 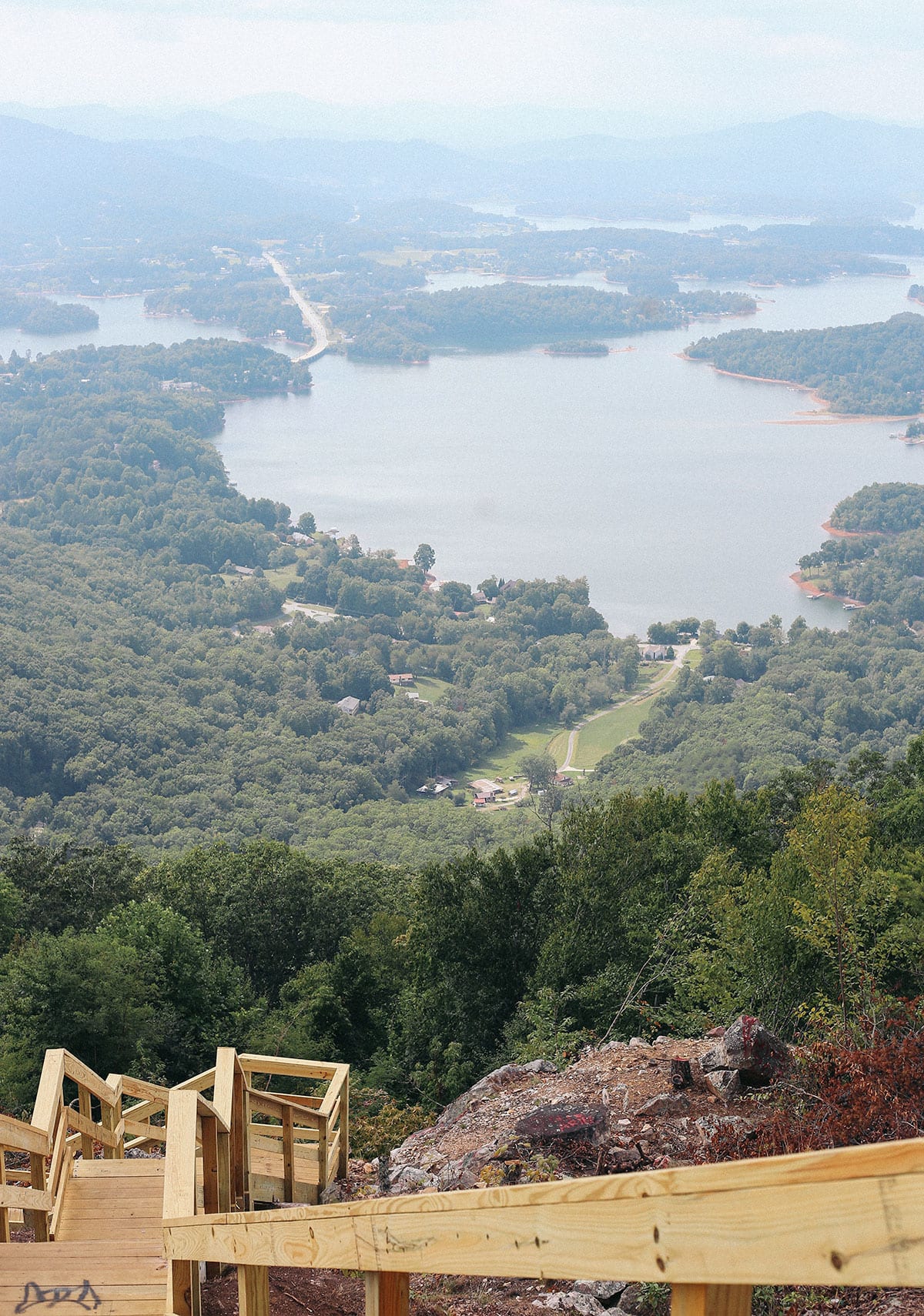 Layer on top of that the issue of me not wanting to write about it because it will shine a light on Bell Mountain and bring increased traffic due to our audience finding out about it.

Layer on top of that the issue of me wanting to write about it because it will shine a light on Bell Mountain and bring increased awareness to our audience finding out about the damage that has been done to this natural place.

This divided dynamic and internal conflict is actually a perfect microcosm of the whole Wander North Georgia project. If we talk too much about our favorite local spots, they get overrun with visitors who don’t treat them with the respect they deserve. Then again, for every bad apple there are two good ones who visit the North Georgia mountains and treat them (and the people who live here) with the care and respect they deserve. In this interaction we both get the opportunity to make each other better. 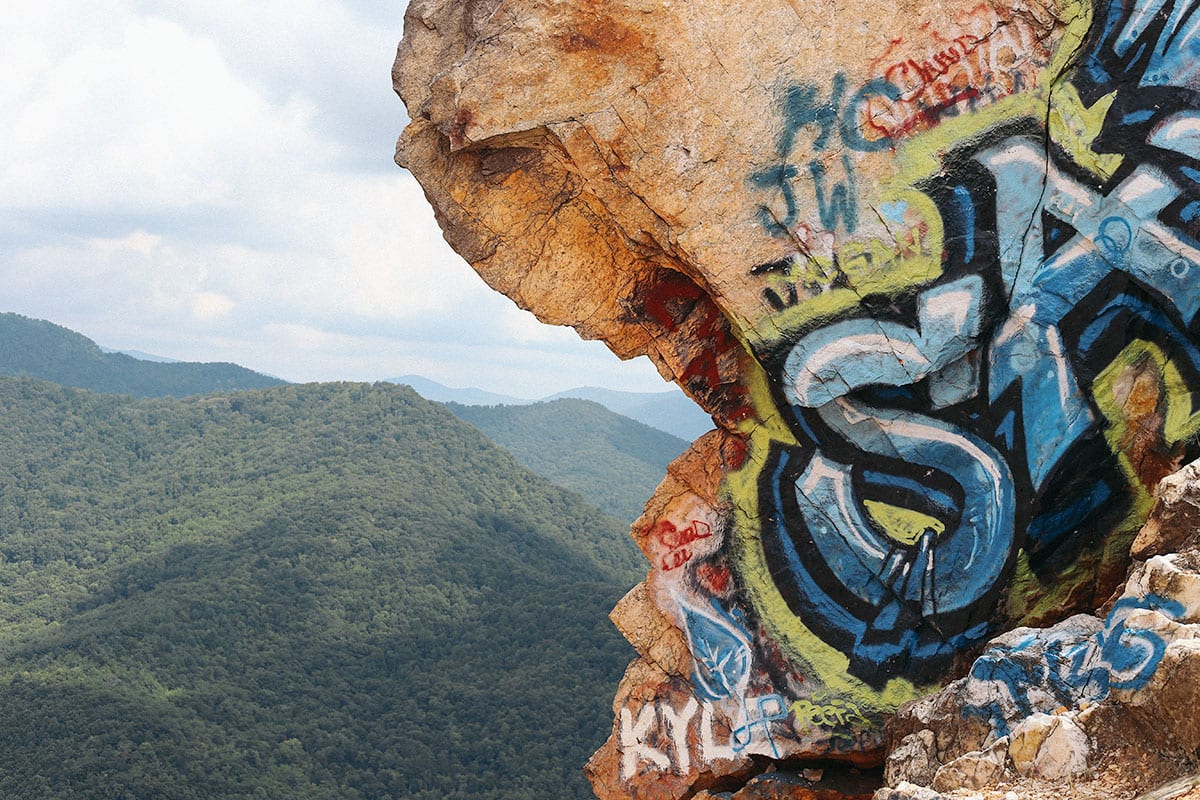 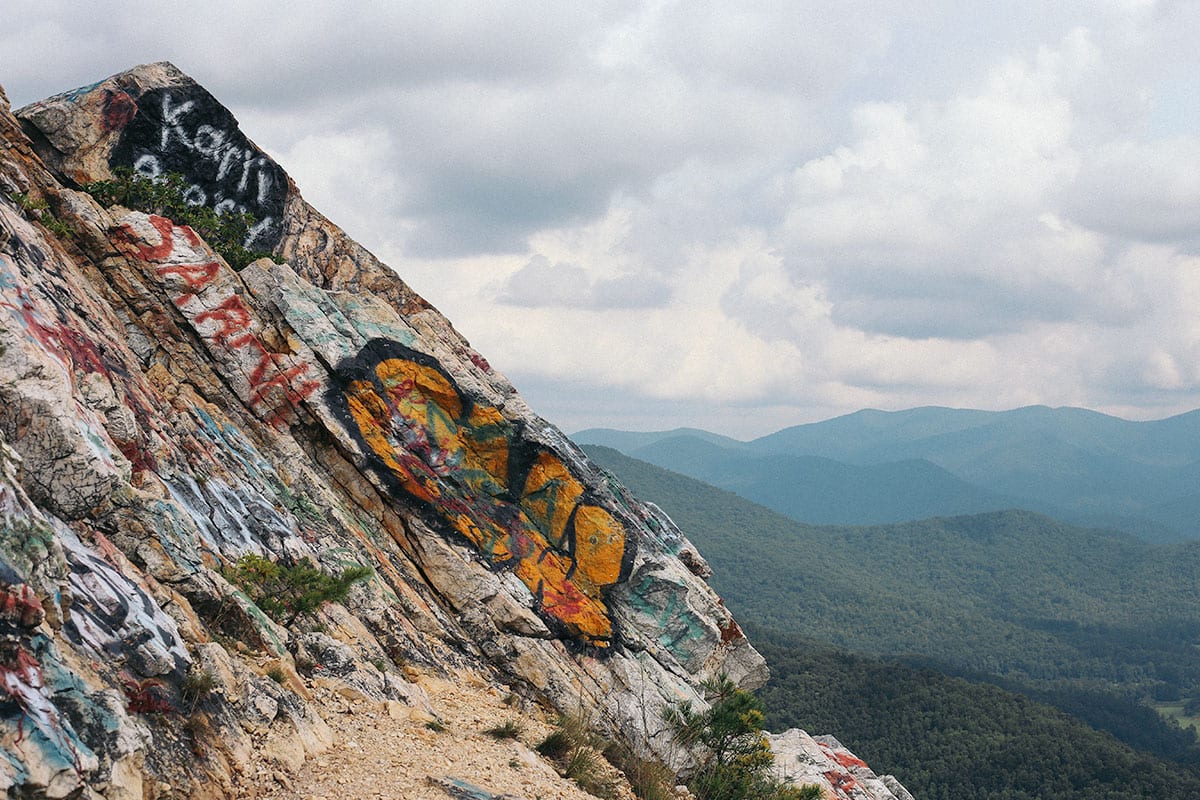 In 1963, three men from nearby Murphy North Carolina decided they could mine the top of it for minerals. Due to ignorance and hubris, they failed miserably and after only a short time there left a huge gaping hole on the top of the 3,400 foot knob that you can now see from miles away. The mountain has maintained this physical scar for over 50 years while the nearby lake has felt it’s more invisible effects from the erosion that pours into Lake Chatuge from the west bound slope affecting the water quality.

After this mining disaster, the mountain was purchased by local resident Hal Herrin in an effort to preserve it from future abuse. It primarily became a home for sunset hikes for locals, and later on, a place for Jeeps and other off-road enthusiasts.

After Mr. Herrin’s passing a few years ago, he generously gifted the mountain to Towns County so that they could create a historical site that would preserve Bell Mountain for generations to come. Something that Mr. Herrin should rightly be applauded for. He understood the importance of preservation for the good of others.

Towns County has since worked hard to get the road to Bell Mountain graded out and a viewing platform on the top in an effort to prevent further abuse and degradation and to preserve the mountain.

A lot of locals feel that by grading the road out that it only makes Bell Mountain more accessible to folks who will take advantage of the knob. Which is a valid concern and one that locals of almost any place can relate to.

Those in the county feel that by making the road more accessible and by making it an easier destination for tourists and locals alike, it will make it harder for people to do things like spray paint the side of the mountain and rut out the roads.

As an outsider (I live in Rabun County) its tough to have a strong opinion one way or the other as I see both sides. I have only been to Bell Mountain once and it was after the road had been graded and the platform built. I enjoyed my time (and view) at Bell Mountain and the small businesses that I shopped at while I was there (Hiawassee Antique Mall is a must stop).

But what bothers me is the blatant vandalism at the top with spray paint and other graffiti. Even when you Google “Bell Mountain and Vandalism” nothing comes up. Nothing at all from local newspapers, magazines, blogs, or city websites. The only mention of it are on the Jeep Forums.

Granted I am only on the outside looking in at a local conversation, but it seems to me that the vandalism is the bigger issue that should be the unifying theme coming from the county and locals. 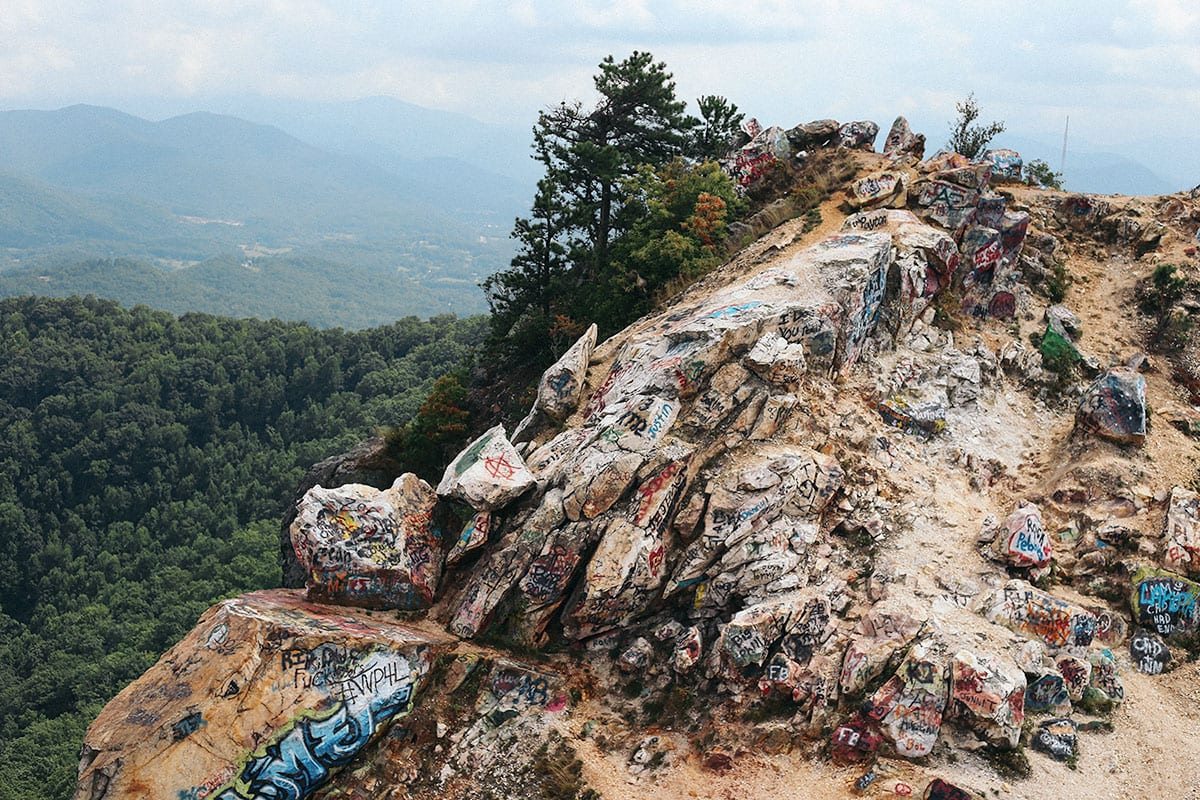 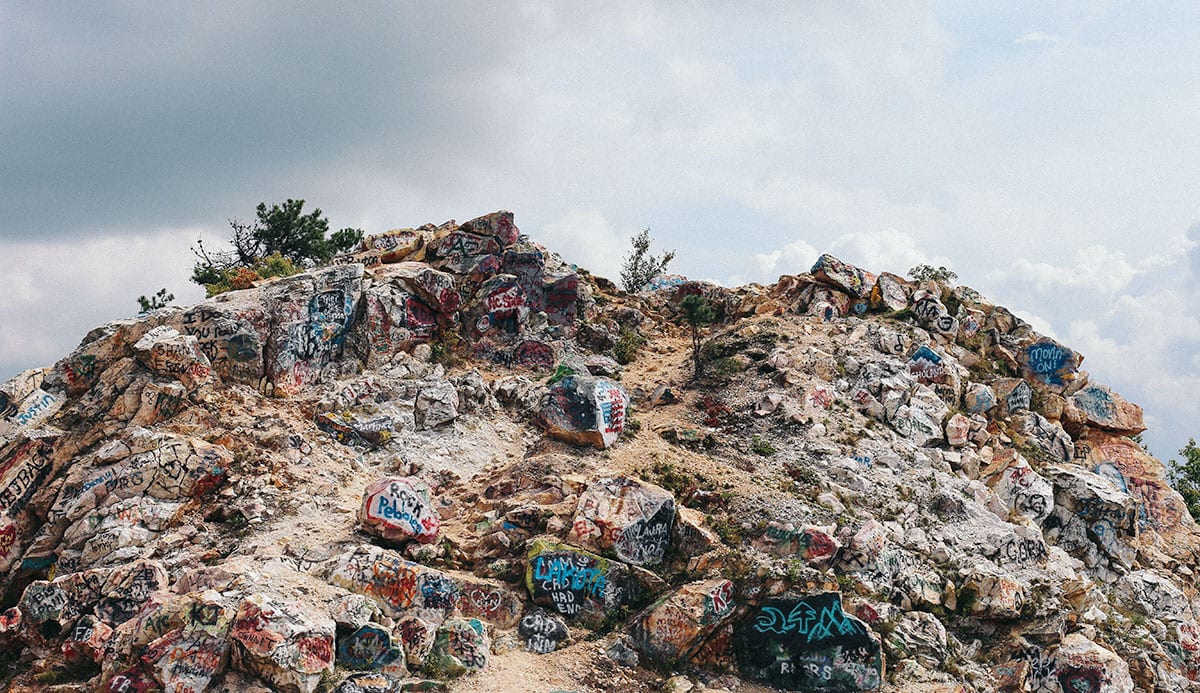 What bothers me about the graffiti is that it is literally a different a shade of the same thing that the three men from Murphy accomplished a half century ago. 50 years ago they gouged out a side of the mountain for their own gain. Today people spray paint their name for their own gain. In each situation people have decided that the mountains exist for their benefit instead of the benefit of the community. They care more about what they can get out of the mountains than what they can give back to them. And that is the problem as I see it.

How do I put more into North Georgia than I take out? How do I add value to this particular place that I have come to love without inadvertently exploiting it for my own benefit? As a business . . . as a citizen . . . as an outdoorsman . . . as a husband and father. 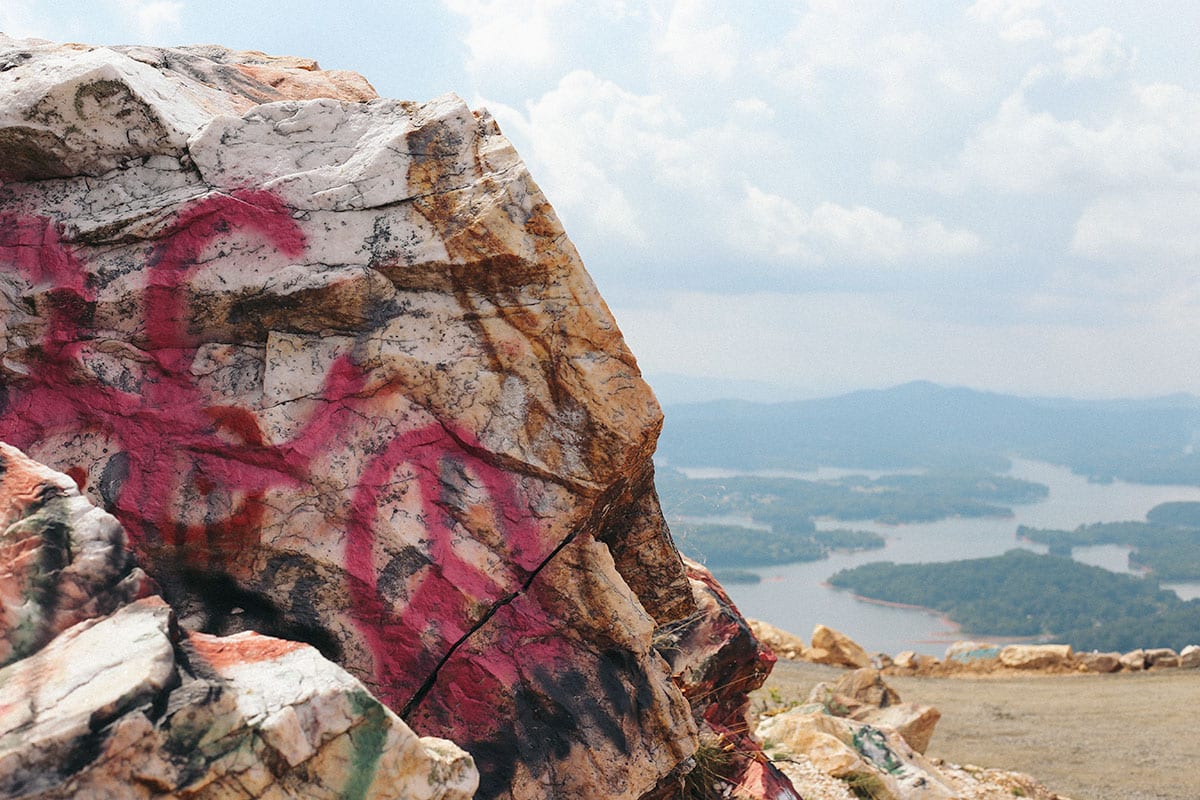 I hate to say something so simple as leave no trace, because these issues are way more nuanced than telling everyone to pick up their trash when they leave. Or in this particular case, don’t spray paint a gorgeous mountain top when you leave.

But we have to do something because these photos are not cute to me. They are not artsy. They are not unique. They are just sad. Even more-so when you consider we’re making the same mistakes as the 3 men from Murphy all over again. 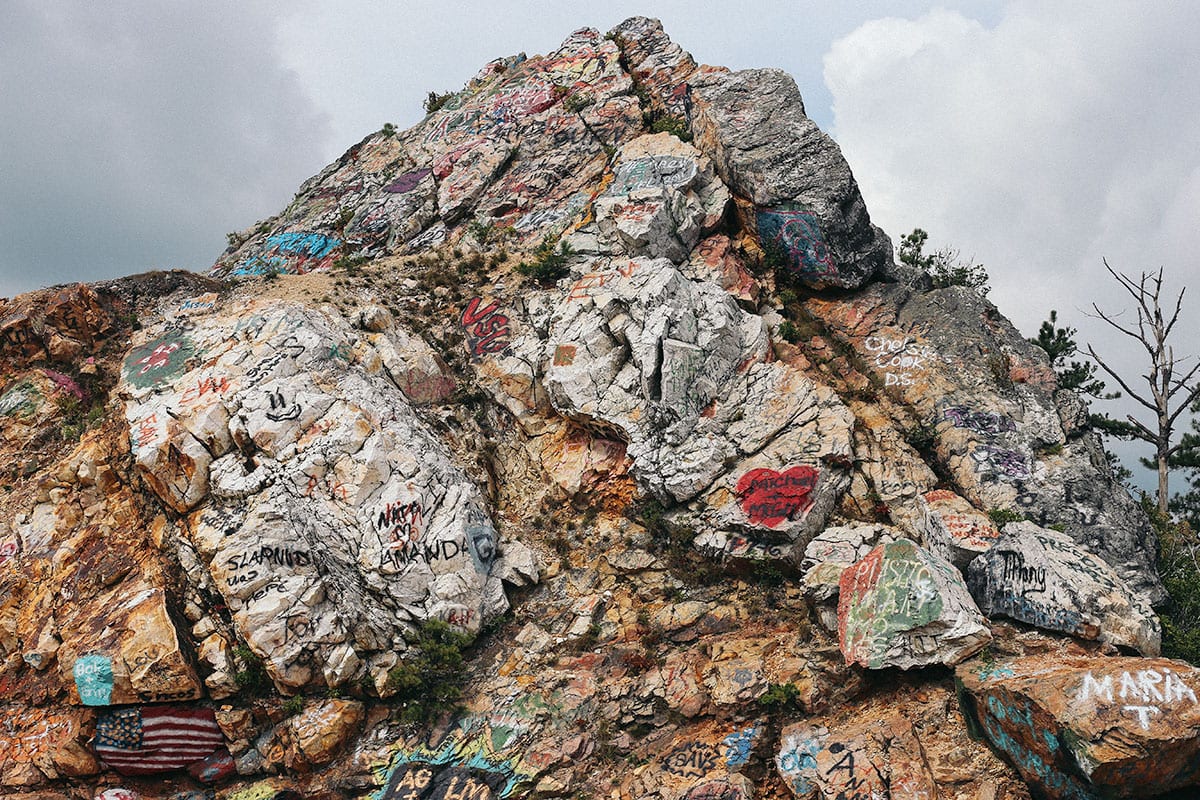 So why write about it here? Why tell more people about a place that has been so obviously abused and taken advantage of for individual pleasure and profit?

We have to get visitors AND locals alike thinking about their role in North Georgia. About how they can put more into these mountains than they take out. How we can view these places as owned by the community and a commonwealth and not by a select few. If someone did this to a public city park or a school or a fire station we would be livid. But with Bell Mountain, we think it’s “cool” and would make a cute Instagram photo. We can’t get upset about a new platform on the top of the mountain but not get upset about the paint that is already covering it weeks later.

If you don’t like the platform, I get it. But please, lets get equally upset with the paint that is already covering the platform.

So you’re welcome to go to Bell Mountain and check it out. It’s still a gorgeous place despite it’s scars. But please play a role in it’s healing. Don’t share photos that romanticize the graffiti. It’s gorgeous enough on it’s own accord. Respect the locals when you meet them. They’re nice folks who will give you some great recommendations if you’re patient enough to earn their trust. Share photos that show the truth of this place and the lessons that we should learn from them. We can not visit Bell without realizing that we’re standing in the same carved out gouge that ignorance created. There has to be a lesson for us in that.

And remember Bell Mountain when you visit some of your favorite places in North Georgia. Remember your role . . . bring more to the mountains than you take away. And in doing so, we will make each other better for visitors and locals alike.

PrevPreviousRoad Trip Rambles: A River, A Bald, and A Beer in Western Carolina
NextOsage Farmers Market: One of North Georgia’s Best Farm StandsNext
WANDER AROUND

Fire on The Mountain: New Life and How To Not Destroy Our Home 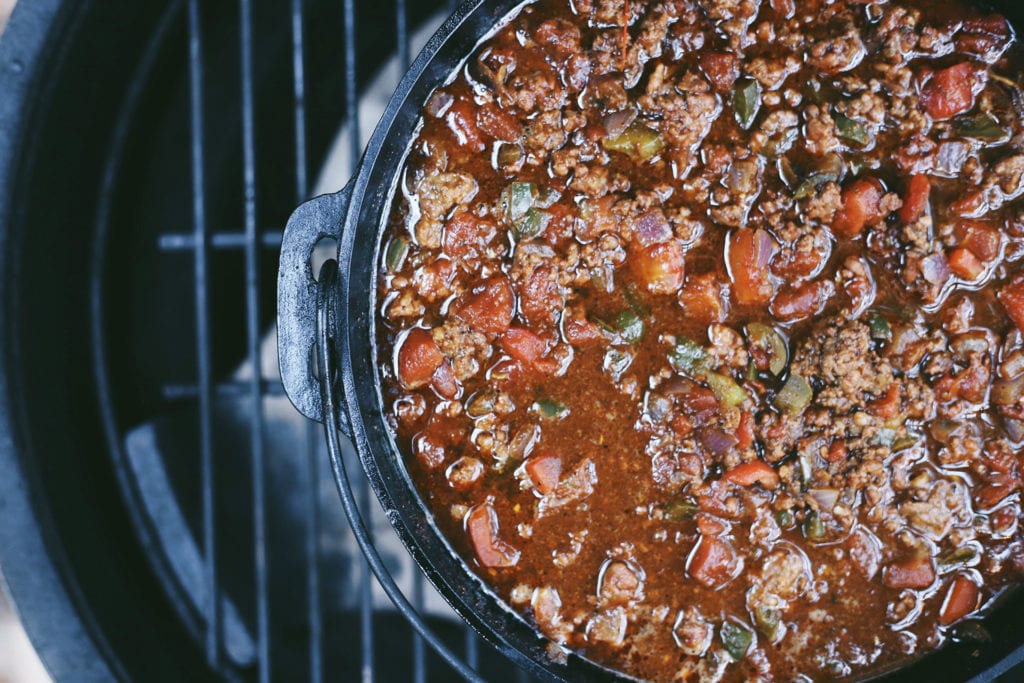